I swear I’m not channeling a famous chef, or any movie about some person who stopped working to cook for a year and blog about the experience. Honest.

I’ve been spending a lot of time indoors because of the weather. I’ve been making soup, and decided to allow myself a blog post about cooking. And here it is: my single, solitary, first-and-last post about cooking/recipes/outcomes and the typical “it’s so good your life won’t be complete without trying it yourself” admonishment.

Even though our apartment came fully furnished and equipped (the kitchen even came with a soup ladle), none of the pots were big enough for the task, and there was no cheesecloth. So I started with a trip downtown and splurged on a classic Le Creuset French Oven, size 28 (seven quart), in Rosemary.

I found a recipe for beef stock, wrote down the list of the ingredients, plus a few more to make a beef soup with vegetables and noodles, then headed out again to the grocery.

The recipe called for “meaty crosscut shanks” of beef and veal. Back home in the US this would have been an easy find. But when I started looking, and then asking for them at the meat counter, I realized I was repeating an experience I had a few months ago about trying to find a simple piece of ham (Normal Ham).

Oh, and the Normal Ham experience doesn’t even come close to what I went through to find a stupid pack of cheesecloth to strain the soup stock.

A guy behind the meat counter at Galleria Kaufhof knew enough English to understand what I was looking for and made a suggestion. Germans love their soup so much that grocery stores sell packages of Rinderknochen and Kalbsknochen (beef bones and veal bones). I bought a kilo of each, not caring if they were meaty crosscut shanks. They looked good enough to me, wherever they were from!

Which made me wonder:  if bones are so easy to find, why not stupid packs of cheesecloth?

Armed with a pot, bones of unknown parts, vegetables, pasta, and what I hoped would work like cheesecloth, I set out to make soup. The bones had to roast for an hour to enhance their flavor. Then they went into the pot with vegetables, herbs, and a few quarts of water and simmered for five hours.

After straining the broth (the supposed cheesecloth worked) I had about six cups of fantastic beef stock. It was almost like a demi-glace, so I added water.

I tossed in some fresh vegetables and pasta, and it made a great meal. For those of you who cook, give this recipe a try. It’s so good your life won’t be complete without trying it yourself.  🙂

Le Creuset French Oven, size 28, in Rosemary (the cover is off to the side, sorry) 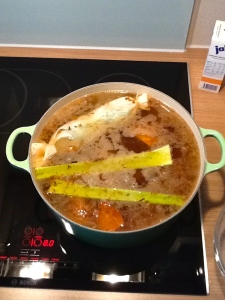 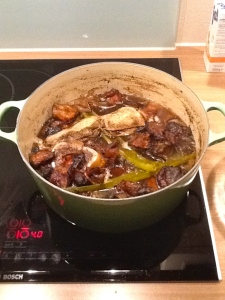 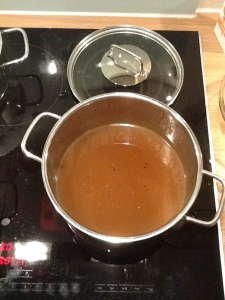